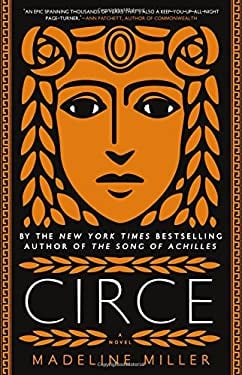 Synopsis: Circe, daughter of Helios, is born with the voice of a mortal without the glow of a god. Shunned by her nymph family, she observes from a distance the gods’ cruelty and greed. When a defiant act of compassion leads to island exile, it is here that Circe finds the freedom to shape a self outside of her divinity.

More than a goddess, she is Circe, witch of Aiaia…

Before reading Circe I was lucky enough to meet the author, Madeline Miller, at an event held by my local bookshop. A particular highlight was hearing her bring extracts of the novel to life through reading them aloud – after all, myths are for storytelling, for sharing and passing on.

It was also illuminating to learn about the different versions of the Greek myths, which I had previously taken as a fixed ‘given’. However, like all history, they are written from the perspectives of the most powerful. This context made reading Circe, an empowering retelling of Homer’s Odyssey that places women at the centre, even more poignant.

Rich and lyrical, the language of the novel feels palpably close to the voice of an immortal with centuries worth of perception. I struggled in vain to pick the customary ‘favourite quote’, but couldn’t resist adding in a few more. There is no greater recommendation of why you should read this book:

“A look passed across her face. I might have called it rage, if it were not pointed so inward.”

“No wonder his father had been so baffled by him. He would have been always looking for the hidden meaning, the knife in the dark. But Telemachus carried his blade in the open.”

“I did not have a thousand wiles, and I was no fixed star, yet for the first time I felt something in that space. A hope, a living breath, that might yet grow between.”

As someone who adores Ancient Greek mythology, I delighted in the infamous stories that touch Circe’s, including those of Odysseus, Daedalus and of course the gods themselves. By portraying both the darker and the softer sides of epic heroes and heroines, the story gives a fresh and multi-faceted perspective.

Circe is as epic as myth should be, spanning generations and many corners of the world. With Circe as a focal point, it still manages to be intimate while we watch her grow in every sense of the word.

The central character, Circe, is flawed and questionable yet essentially good. Her unquenchable rage at oppression is ever-present but usually confined within a dignified strength. This makes the rare moments where she loses control powerful and grimly satisfying (yesss, girl, you tell ’em!!!)

“It is a common saying that women are delicate creatures, flowers, eggs, anything that might be crushed in a moment’s carelessness. If I had ever believed it, I no longer did.”

What makes this novel such a feat is that – in spite of their separation from us by thousands of years, immortality and divine powers – the characters remain so intensely relatable, and are still able to provide compelling insights into our world today.

“I thought once that gods were the opposite of death, but I see now they are more dead than anything, for they are unchanging, and can hold nothing in their hands.”

Read if: you want to be entranced by an empowering adaptation of Ancient Greek myth.

If you enjoyed Circe, I cannot recommend highly enough Bridge of Clay by Markus Zusak.

Have you read Circe – what did you think? How about Madeline Miller’s other novel Song of Achilles which I am keen to read next? Let me know in the comments – I would love to hear from you!