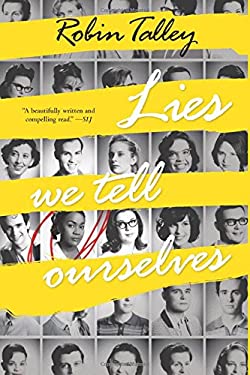 Synopsis: Sarah and her sister Ruth are among the first. The first black students to attend formerly all-white Jefferson High School. The first to endure protests by white students against integration. The first to read bitter articles in the school magazine denying them their right to be there.

When the author of these articles, Linda Hairston, steps between Ruth and a group of bullies, Sarah is one of the only witnesses. Both Sarah and Linda find something has changed in them, as everything they thought they knew about each other is overturned…

I particularly liked the unique structure of Lies We Tell Ourselves. Each chapter is narrated by either Sarah or Linda, based quite literally on one of the ‘lies’ they have been holding in their own minds.

The first chapters of the novel were harrowing and intense. The group of black students are constantly on the lookout for the next act of violence, wondering if this time it will be taken even further. My own suspense, as I too waited with dread, felt like a pale mirroring of their fear.

Robin Talley’s characters are believable, ambiguous and conflicted. Although not the most likeable, I found Linda certainly the most fascinating. Despite utterly despising her actions at many times in the story, there were other moments where I felt sorry for her. She made me confront some serious questions about how far we can judge others.

I liked that responsibility for changing Linda’s bigoted viewpoints does not lie with Sarah alone. Linda also engages with and questions her own thought processes; it is intriguing to read from the viewpoint of such a conflicted mind.

The side-plots of the book brought additional tension, such as Chuck’s illicit love affair. However, I would have liked for these elements and characters to have been more fully developed.

“It is intriguing to read from the viewpoint of such a conflicted mind.”

Sarah and Linda’s romance is the core centrepiece, and it is by no means predictable or straightforward. Any linear plot is disrupted by characters who behave just like the complex, unpredictable, frustrating human beings they are.

Part of me felt that the ending wrapped up a little too neatly. Another part applauded the author’s optimism – somebody has to hold out some hope for humanity at the moment! With homophobia and racism still rife around them (and even within them), Sarah and Linda undoubtedly had many more challenges to face. A degree of uncertainty still remains that allows readers space for imagination.

Romances are stereotypically ‘cosy’, yet Lies We Tell Ourselves is no comfortable read. It forced me to ask so many questions. To what extent can someone’s own suffering be used to explain the suffering they inflict on others? Who is responsible for changing the minds of those with hateful opinions? Can we change?

“We punish ourselves so much in our own imaginations. We convince ourselves everything we do, everything we think, is wrong, For eighteen years I’ve believed what other people told me about what was right and what was wrong. From now on, I’m deciding.”

Read if: You would like to read a representative and thought-provoking romance.

Lies We Tell Ourselves

Have you read Lies We Tell Ourselves – what did you think? Do you have any recommendations for romance novels I can read next? Let me know in the comments – I would love to hear from you!

5 thoughts on “Lies We Tell Ourselves by Robin Talley: Thought-Provoking Romance”