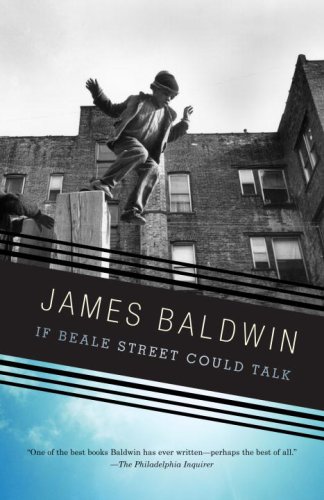 Synopsis: For childhood best friends Tish and Fonny, becoming a couple in adulthood seems like the easiest, most natural thing in the world. Until Fonny is jailed for a rape he never committed, just before Tish announces she is pregnant with his baby.

Two families must cling to each other in the turbulent struggle for justice that ensues against the institutional racism of America.

If Beale Street Could Talk has been on my list to read for a while. I was sped up by my family buying the DVD, so I really wanted to read the book first! Having finished reading, I am extremely glad that the media attention surrounding the film release will bring this poignant story into the foreground.

The most striking thing about Baldwin’s novel is the undercurrent of anger that gives it a stripped back, raw feeling. An aura of protest surrounds every page. I had the impression that this was not a book indulgently written for the simple love of writing itself. It was meant to be read. And it was meant to have an impact on its readers.

Baldwin’s writing is rhetorically charged – you can hear the author’s voice in the novel as well as the characters’. However, rather than feeling intrusive, such asides are part of what makes the language so powerful. His own marginalised experiences as a gay American of colour imbue the story with an intensity of purpose.

My disbelieving horror at the suffering Tish, Fonny and their families were exposed to by institutional racism was impossible to recover from, even after turning the final page. I became acutely aware of my own privilege – such dark knowledge and fear was not part of my inheritance.

What kept me turning the pages of this book was not the plot (although I was desperate to know what would happen) but the dialogue. Baldwin creates a bruisingly beautiful sketch of the interplay of strength, quiet wisdom and vulnerability between those who love each other.

Although Tish is the central character of If Beale Street Could Talk, initially the other characters seemed more defined. Ultimately, though, I liked the fact that Tish was never pigeonholed. Young and still developing her sense of self, she finds stability in others around her, even if she is unsure of her own place in the world.

The distilled representation of romantic and familial love in this novel felt intimate but also broad, standing for more than one character or one story. Baldwin’s depiction of fierce love in the face of fear and suffering left me reeling.

“We don’t know enough about ourselves. I think it’s better to know that you don’t know, that way you can grow with the mystery as the mystery grows in you. But, these days, of course, everybody knows everything, that’s why so many people are so lost.”

Read if: You like the sound of an intense, rhetorically charged love story.

If Beale Street Could Talk

If you enjoyed If Beale Street Could Talk, check out Lies We Tell Ourselves by Robin Talley.

Have you read If Beale Street Could Talk – what did you think? Do you have any recommendations for romance novels I can read next? Let me know in the comments – I would love to hear from you!