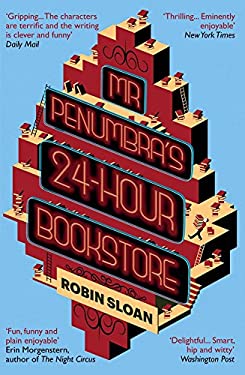 Synopsis: Clay Jannon has just lost his marketing position after the company went bust. Unemployed and increasingly desperate, he takes a job as the night clerk at Mr Penumbra’s 24 Hour Bookstore. His eccentric employer has only 2 requirements:

One night, when there are no customers, Clay can no longer suppress his curiosity and opens one of the forbidden books. Its contents will draw him into a centuries-old unsolved mystery…

Believe it or not, Mr Penumbra’s 24 Hour Bookstore is on my university set reading list for next year – I love my degree!!! It is such a fun read and another wonderfully unexpected, non-traditional addition to our course.

Despite not seeming very academic, it is relevant I promise! I am taking a module on literature and digital culture; Robin Sloan’s novel is fitting because it explores the relationship between books and technology in a light-hearted, slightly teasing way.

My highlight of this story was its talented, funny and often eccentric assortment of characters. Like all good adventure stories, it also has its fair share of bad guys!

I admired the smart and ambitious Kat. She is a rising star at Google who refuses to compromise her intellect to make her seem less threatening to males of the species. However, my favourite has to be Clay, the central character. His imagination and adventurous spirit give him a real knack for unravelling mysteries.

Flashes of normalcy and unashamed geekery helped to make him feel more relatable:

The first thing to understand about Mr Penumbra’s 24 Hour Bookstore is that it’s not meant to be believable. Inspired by fantasy and science fiction, it exalts in pushing the boundaries of credibility.

Instead, it’s best to just go with this helter-skelter adventure story in which knowing everything will turn out for the best is part of the charm. This sheer enjoyability does not mean the book isn’t thought-provoking. Sloan explores themes such as:

Mr Penumbra’s 24 Hour Bookstore is clearly a well-researched and carefully thought-out piece of fiction. References to Gutenberg and the first printed books made my inner literature nerd light up. Despite this, the novel manages to never take itself too seriously.

Throughout the book, Sloan gently pokes fun at the ancient(ish) books vs technology debate. No sides are taken: e-reader-defenders and hardcore bookworms alike are not immune to becoming objects of the author’s witty observations:

“Kat bought a New York Times but couldn’t figure out how to operate it, so now she’s fiddling with her phone.”

“I did not know people your age still read books,’ Penumbra says. He raises an eyebrow. ‘I was under the impression they read everything on their mobile phones.’
‘Not everyone. There are plenty of people who, you know – people who still like the smell of books.’
‘The smell!’ Penumbra repeats. ‘You know you are finished when people start talking about the smell.'”

“Your life must be an open city, with all sorts of ways to wander in.”

Read if: You want to be delighted by a fun and quirky adventure story!

If you enjoyed Mr Penumbra’s 24-Hour Bookstore, take a look at The Keeper of Lost Things by Ruth Hogan.

Have you read Mr Penumbra’s 24-Hour Bookstore, or anything else by Robin Sloan? Do you think the books vs technology debate is sometimes taken too seriously? Let me know in the comments – I would love to hear from you!