As it would have been Graham Greene’s birthday next week, I have revived my review of his dark exploration of gang warfare: Brighton Rock. Despite its holiday-destination setting, the novel also has a suitably creepy autumnal feel… 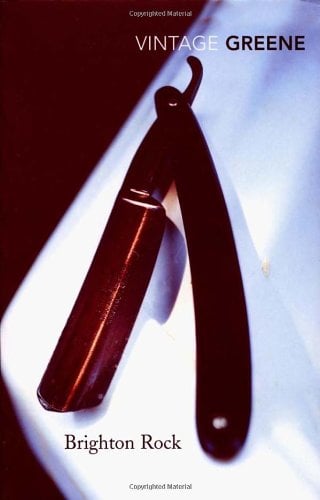 Synopsis: The novel is set in 1930s Brighton, where the holiday amusements sit in stark contrast to a sinister gang underworld. Central to our view of this underworld is Pinkie, a boy of only 17 who orchestrates the killing of rival gang informer Fred.

Little does he know that Fred had befriended the uncompromisingly righteous Ada, who is determined to see justice done. As he commits increasingly violent acts to protect himself and his fragile status, Pinkie is left spiralling further into a state of amorality and despair.

I will begin with a warning. If you are looking for a little light reading then I suggest you look away now, as Brighton Rock is nothing of the sort. It’s dark, it’s heavy, and it’s frankly pretty depressing. However, this does nothing to dull the fact it is also compelling literature, managing to unsettle, frighten and fascinate all at the same time.

I have put this book in the category of ‘thriller’ but in reality, it defies categorisation. As well as a murder novel, there are also elements of a psychological thriller plus a sustained exploration of morality and human nature.

The aspect of Brighton Rock that stood out for me most was the characters. Greene’s main character Pinkie is controversial and fascinating. He may be a razor-blade-wielding psychopath, but I still could not bring myself to completely hate him. This was unsettling, but it can probably be attributed to the pity I felt for Pinkie and the utter bleakness of his existence.

“Heaven was a word: hell was something he could trust.”

It may be her desperation to escape an equally miserable life as an underpaid waitress that drives Pinkie’s girlfriend, Rose, to remain obsessed with her misogynistic and abusive partner. Her naïve attachment paints a saddening picture, even if such passivity is enough to make any modern woman cringe.

Ada is the only character that acts as a source of brightness in the novel. She is jolly and pleasure-seeking yet maintains a strong sense of principle. Ada is not only there for entertainment, but central to the book’s moral exploration. However, I found that the endless contrasts drawn between her and Pinkie became a little heavy-handed at times.

Characters remain the central point of the novel, with complex relationships and an uneasy combination of friendship and mistrust.

However, there is also a strong plot which carefully balances description, character development and action. The tension is expertly maintained; with such an amazing opening line it is impossible not to keep reading:

“Hale knew, before he had been in Brighton three hours, that they meant to murder him.”

Brighton Rock is the sort of book that leaves you with more questions to wrestle with than answers. Many of these major questions are as relevant now as they were in the 1930s. Are people inherently good or bad? Are we simply the consequence of our upbringing? And what is the making of a murderer?

‘You been in love?’ the Boy asked sharply and uneasily. ‘Oh yes,’ Rose said. The Boy retorted with sudden venom, ‘You would have been. You’re green. You don’t know what people do.’

Read if: You would enjoy a clever and dark exploration of gang warfare.

Have you read Brighton Rock? What did you think, especially about Greene’s complex characters? Please feel free to share your opinion in the comments!