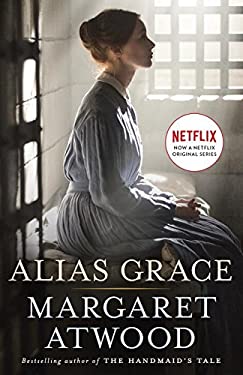 Alias Grace is based on the actual historical figure Grace Marks, who was convicted of murdering her employer and his housekeeper in 1843, alongside James McDermott. In this fictionalised account, it is uncertain whether she was acting under duress, out of fear for her own life, or if she was McDermott’s lover and co-conspirator.

The ambitious psychologist Dr Jordan is sent to the penitentiary to draw out the truth. However, with Grace claiming to have no memory of the incident, it will be difficult to separate the innocent, exploited young girl from the woman capable of unspeakable violence.

I love a good unreliable narrator, so this is what struck me first about Alias Grace, as the protagonist gradually relates her story to a curious psychologist. It creates the disconcerting effect of never quite knowing what you’re reading:

An intricately crafted lie? A deep psychological exploration of a woman who has never believed she has any control over her life? Or even an eerie supernatural tale?

In Alias Grace, Atwood manages to combine so many elements without the story feeling unbalanced.

As well as a strong dose of suspense, it is a character-centric novel, particularly when dealing with Grace and Dr Jordan.  From both these portrayals, I got a realistic sense of the characters’ struggle to form their own identities out of the expectations of others.

The only point at which I felt there was a little too much going on was when the story strayed into supernatural realms, which did not seem to gel with the other happenings. Also, the ending felt unresolved, but I sense this lack of satisfactory closure is important to maintain the ambiguous nature of truth explored throughout the book.

However, I will always love Atwood’s writing style – the deadpan delivery conceals so much that is going on beneath the surface, such as the subtle undercurrent of sexual power dynamics in many of the relationships.

Alias Grace is a wonderful example of feminism that is intersectional in terms of class. While the historical setting is atmospheric, it is not romanticised at all, with the precarious and powerless position of women in service during this period made clear.

The morbid curiosity, voyeurism and sensationalism in the way the press reported this (real-life) crime seemed to have numerous parallels with modern media. It really made me consider the slippery nature of truth.

“When you are in the middle of a story it isn’t a story at all, but only a confusion; a dark roaring, a blindness, a wreckage of shattered glass and splintered wood; like a house in a whirlwind, or else a boat crushed by the icebergs or swept over the rapids, and all aboard powerless to stop it. It’s only afterwards that it becomes anything like a story at all. When you are telling it, to yourself or to someone else.”

Read if: You want to be absorbed in a character-centric historical crime.

If you enjoyed Alias Grace I can highly recommend The Handmaid’s Tale by Margaret Atwood.

Have you read Alias Grace or anything else by Margaret Atwood? What did you think? Let me know in the comments – I would love to hear from you!