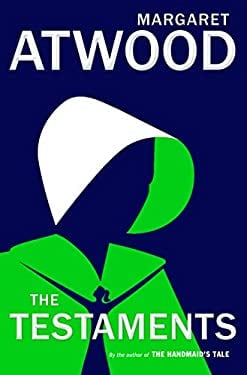 Lydia is one of the most feared Aunts in Gilead – but she’s about to go rogue with a secret manuscript.

Agnes and Daisy are both navigating the trials of coming-of-age – but with one raised inside and one outside Gilead, they might as well come from different planets.

These three unlikely women will be brought together to unite against the powerful Gileadean theocracy – challenging every single one of their assumptions about reality in the process.

My parents, who clearly know me too well, gave me this book for my birthday – and I knew I was going to enjoy it from the front fold of the dust jacket!

“Before you enter their world, you might want to arm yourself with these thoughts:

History does not repeat itself, but it rhymes.“

I loved that Atwood incorporated references from both the book and T.V. adaptation of The Handmaid’s Tale, which gave an immersive experience from the beginning for hardcore fans like myself. Don’t worry though – the T.V. references are subtle enough that it isn’t important to the plot.

As someone who enjoys reading from twisted perspectives, I was also darkly delighted when the story was introduced by none other than the cutthroat Aunt Lydia.

Now to address the elephant in the room… I tried so hard while reading The Testaments not to constantly compare it to The Handmaid’s Tale. Overall, I do still prefer The Handmaid’s Tale, when the world of Gilead was new and reading about it for the first time was like literary ammunition.

That said, in my opinion the two novels complement one another well. It’s fascinating to read a more in-depth perspective in The Testaments, especially relating to how Gilead was originally formed. I loved the ending too (no spoilers, I promise!). The epilogue was one of my favourite elements of The Handmaid’s Tale and didn’t disappoint in this one either!

In true Atwood fashion, The Testaments delivers a powerful feminist message. However, a little more illustration of female solidarity – similar to that between Moira and June in The Handmaid’s Tale – would have been ideal.

On one hand, we have the Aunts constantly trying to undermine one another, and the more positive relationships between women couldn’t quite counterpoint this as they only began to grow roots towards the end.

Reading from Aunt Lydia’s perspective may have made me (slightly) more sympathetic towards the vicious Aunts. The cruel way in which they were coerced into their roles helps to explain the choices they made, even if it doesn’t excuse them.

This got me wondering: how far does fear excuse complicity?

“Two roads diverged in a yellow wood, and I took the one most travelled by. It was littered with corpses, as such roads are. But as you will have noticed, my own corpse is not among them.”

Read if: You want to become immersed in a searingly realistic dystopian novel with a powerful feminist message.

Before you dive into The Testaments, I highly recommend starting with The Handmaid’s Tale by Margaret Atwood first.

In this post, I compare The Handmaid’s Tale novel with the amazing Hulu T.V. series.

Have you read The Testaments and/or The Handmaid’s Tale? What did you think? Let me know in the comments – I would love to hear from you!

19 thoughts on “The Testaments by Margaret Atwood: Searingly Plausible Dystopian”