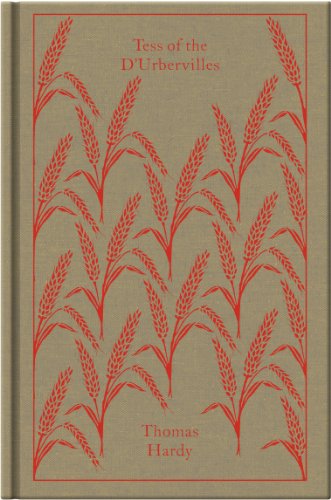 When John Durbeyfield learns that he is descended from a grand ancient lineage known as the d’Urbervilles, he sends his daughter Tess to their nearest relations in the hope of claiming kin and improving his family’s prospects. As the family sinks ever-further into poverty, she is only too aware of the keen urgency of her mission.

However, Tess knows nothing of the world outside her village, or the attention she draws by nature of her youth and beauty. Her experiences at the d’Urberville house will leave her torn between preserving secrecy – and her reputation – or risking honesty with the people she loves most.

The rural setting of Tess of the D’Urbervilles made me nostalgic for the time I spent working on farms as part of my veterinary training. Not those horrible factory farms, but traditional family-run affairs where the only equipment you’re given is wellies and a dog, the animals all have nicknames, and the grandma brings out bacon sandwiches when the vet visits!

I appreciated the beautiful writing style that helped fuel this nostalgia. Not only did the vividness apply to Hardy’s carefully rendered landscapes, but the author is attentive to the nuances of character too.

However, as I continued to listen to this story I found myself feeling deflated by it – Hardy’s tale is pretty unrelentingly bleak. Tess is also passive and accepting of her gloomy fate, which makes her difficult to root for as a protagonist.

“Ladies know what to guard against, because they read novels that tell them of these tricks”

I couldn’t help but compare Tess of the D’Urbervilles with Far From the Madding Crowd, the other Hardy novel I’ve read. The latter has its ups and downs, but is less depressing overall, and the character of Bathsheba is much more self-determined than Tess.

A patronising tone towards women pretty much comes with the territory for Victorian literature, but in spite of this, Hardy does make an effort to depict the double standards women were subject to in this period.

Tess of the D’Urbervilles was published in 1891 but many of its themes, particularly those surrounding sexual assault and rape, still resonate today. Hardy accurately represents the trauma of victim-blaming before this term even existed.

“In the ill-judged execution of the well-judged plan of things the call seldom produces the comer, the man to love rarely coincides with the hour for loving. Nature does not often say “See!” to her poor creature at a time when seeing can lead to happy doing; or reply “Here!” to a body’s cry of “Where?” till the hide-and-seek has become an irksome, outworn game.”

Read if: You are intrigued by a classic pastoral tale with a hint of proto-feminism.

Tess of the d’Urbervilles

If you enjoyed Tess of the d’Urbervilles why not try The Tenant of Wildfell Hall by Anne Brontë?

Have you read Tess of the d’Urbervilles or anything else by Thomas Hardy? What did you think? Let me know in the comments – I would love to hear from you!

11 thoughts on “Tess of the d’Urbervilles by Thomas Hardy: Classic Pastoral Tale with a Hint of Proto-Feminism”