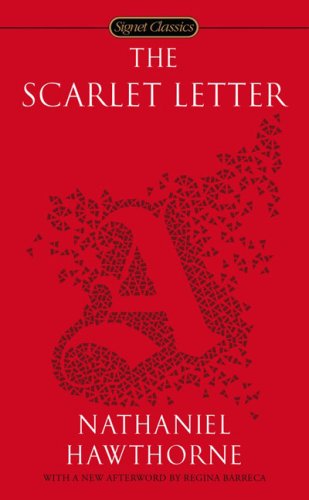 Hester Prynne’s husband is missing, presumed dead. Most believe he drowned on the voyage from Amsterdam to join her in New England. Yet getting pregnant out of wedlock is still enough to earn Hester a lifelong punishment – wearing the scarlet letter ‘A’ embroidered on her clothing so her shame can never be forgotten.

Cast to the margins of her Puritan village community, Hester lives in solitude and tries to raise her daughter Pearl away from prying eyes. When a newcomer to the village brings old secrets, she is forced to choose between a life of piety and redemption, or following her perilously taboo passions.

I’ll start with a warning – The Scarlet Letter features the most pointless prologue of any book I have ever read. Nathaniel Hawthorne essentially follows the somewhat worn-out trend of trying to present a fictional novel as a long-lost true story.

He somewhat labours the point, with endless descriptions of the dusty customs house where he ‘stumbles upon’ an embroidered scarlet letter and convenient explanatory manuscript.  This goes on for over an hour of the audiobook, at which point I was sorely tempted to DNF. Fortunately, I decided to persevere and see if this was going somewhere.

If you can get past the tedious preamble (or just skip it – doing so honestly won’t affect your understanding in any way) things are only going up from there, I promise!

The first chapter of The Scarlet Letter begins with Hester being publicly shamed following the birth of her daughter, Pearl, out of wedlock. I expected what followed to be a mystery of sorts, revealing the father of her child, but the tale that unfolded was something else entirely.

Although it isn’t strictly mysterious – Pearl’s father is revealed very early – the intrigue of The Scarlet Letter is never lost. Mostly, it is provided by a fascinating character exploration, including not just Hester herself but also Roger Chillingworth, a newly arrived doctor, and the reverend Arthur Dimmesdale. Their tumultuous emotions, guilt, and vengeful obsessions made for an intense and dramatic story.

Hawthorne’s historical setting also contributes to the atmospheric feel of this novel. The Scarlet Letter takes place in a Puritan village within the Bay Colony of Massachusets, New England in the 1600s. Reading depictions of this close-knit yet repressive community reminded me of why I love historical fiction.

While the symbolism of the actual scarlet letter which Hester wears may seem heavy-handed, it has enough nuance not to become repetitive. It begins as a symbol of Hester’s shame as an adulteress, but the meaning changes and shifts towards something more positive – passion? Independence? Resilience?

The Scarlet Letter can be described as proto-feminist, mainly because it portrays Hester as an emotionally complex character rather than simply a monstrous adulteress, which is about as much sympathy as could be expected when the novel was published in 1850.

Even then, Hawthorne’s book proved controversial, with some demanding that it should be banned on the grounds of moral outrage for not being more punitive towards the character of Hester.

Modern readers are far more likely to roll their eyes at the fact that a book which seems to have a female central character still manages to really be about the men in her life. Yet the themes of double standards and women’s lack of sexual autonomy are still painfully recognisable and relevant today.

With a dramatic plot and evocative historical setting, it’s easy to see why The Scarlet Letter is popular for adaptations, including the 2015 film with Molly Wilson as Hester and, most famously, the 1995 version starring Demi Moore.

However, just by looking at the covers of the films it’s easy to see that they tend to downplay the book’s religious and moral intensity in favour of more overt sexual passions. Have the ethical conflicts of The Scarlet Letter lost their urgency in today’s more secular modern world?

“No man, for any considerable period, can wear one face to himself and another to the multitude, without finally getting bewildered as to which may be the true.”

Read if: You are intrigued by the thought of a psychologically driven classic.

If enjoy proto-feminist classics, take a look at Tess of the d’Urbervilles by Thomas Hardy.

Have you read The Scarlet Letter? What classics have you read for the first time lately? Let me know in the comments – I would love to hear from you!